ARLINGTON, Va.  –The Vatican issued a decree granting St. Mary Catholic Church in Alexandria, the title ‘minor basilica,’ making it the first basilica in Northern Virginia, the first in the Catholic Diocese of Arlington and the 84th in the United States.

The 223-year-old Roman Catholic Church will officially be named “The Basilica of Saint Mary.”

Following the Mass, they were both available for interviews with the media.

Founded in 1795, the Church of St. Mary is the first Catholic parish in the Commonwealth of Virginia and State of West Virginia, which were one state until 1863. George Washington made the first financial contribution to the parish in the late 1700s, equivalent to $1,200 today. A chapel was built at the south end of Alexandra in 1795. In 1810, the parish moved to its present location in the heart of the city on South Royal Street.

About
The Diocese of Arlington is home to an estimated population of more than 600,000 Catholics living in 21 counties and seven cities in central and northern Virginia. Parishioners live out their faith at 70 parishes and six missions, and more than 17,500 students attend 45 Catholic pre-schools, elementary and high schools. Founded in 1795, the Church of St. Mary, located in Alexandria, Virginia, is the first Catholic parish in the Commonwealth of Virginia and West Virginia, which were one state territory up until 1863. President George Washington made the first contribution for the creation of a Catholic parish in Virginia in the late 1700s, equivalent to approximately $1,200 today. A donation was made for a portion of land at the sound end of the city on Church and South Washington Streets. It was here that the first brick structure known as the Church of Saint Mary was built under the guidance of the Very Reverend Francis Ignatius Neale, S.J. in 1795. The land later became, and still remains today, the Church of Saint Mary’s cemetery, the first Catholic cemetery in Virginia.

In 1810, the parish moved to its present location in the heart of the city at 310 South Royal Street. By 1826, Pastor Fr. Joseph Fairclough erected the Sanctuary and the major portion of the present-day church, which was formally dedicated in 1827. Throughout the 1800s, the Church of St. Mary played a crucial role in the growth of Catholicism in Virginia. Many mission churches that the Church of St. Mary established have gone on to become independent parishes within the Diocese of Arlington.

Today, the Church of St. Mary continues to be a vibrant and lively parish community with 54 apostolate groups, 400 parishioners regularly volunteering throughout the community, 18 lay staff members and 3 full-time priests. In 2020, the Church of St. Mary will celebrate 225 years of parish life. St. Mary’s School (K-8) had a record enrollment of 712 students for this academic year (2017-2018), and will also celebrate a historic 150th anniversary in 2019. What is a Basilica?

The word Basilica comes from a Greek term meaning “Royal House,” which was a public building in which royal business was transacted. The term was adopted by the Romans, and after Christianity became the principal religion of the Roman Empire, the word was applied to large and important churches. Today, it can refer to a particular architectural style, but in the case of the Basilica of St. Mary it denotes a church that has been given special designation by the Pope. The reasons for bestowing this designation include architectural beauty, historical significance, liturgical renown, or any combination of these attributes. A Basilica shares a special relationship with the Vatican and with the Holy Father. Due to this unique relationship between the Holy Father and the designated church, a Basilica celebrates certain liturgical days with particular care.

There are two types of Basilicas – Major and Minor. There are four Major Basilicas in the world (St. Peter’s Basilica, St. John Lateran, St. Paul Outside the Walls, and St. Mary Major), and several thousand Minor Basilicas in various countries and nations.

Three physical signs to indicate that a church is a Minor Basilica.

Requirements to be named a Basilica

The Three Symbols of a Basilica

Three physical signs to indicate that a church is a Minor Basilica.

The Papal Cross Keys are the symbol of the Papacy, and represent the keys refer to the promise of Christ to Peter, “I will give you the keys to the kingdom of heaven. Whatever you bind on earth shall be bound in heaven; and whatever you loose on earth shall be loosed in heaven.” (Matthew 16:19). The presence of the keys symbolizes the continuous relationship of the Basilica to the Holy Father in Rome.

The Seal of the Basilica of Saint Mary 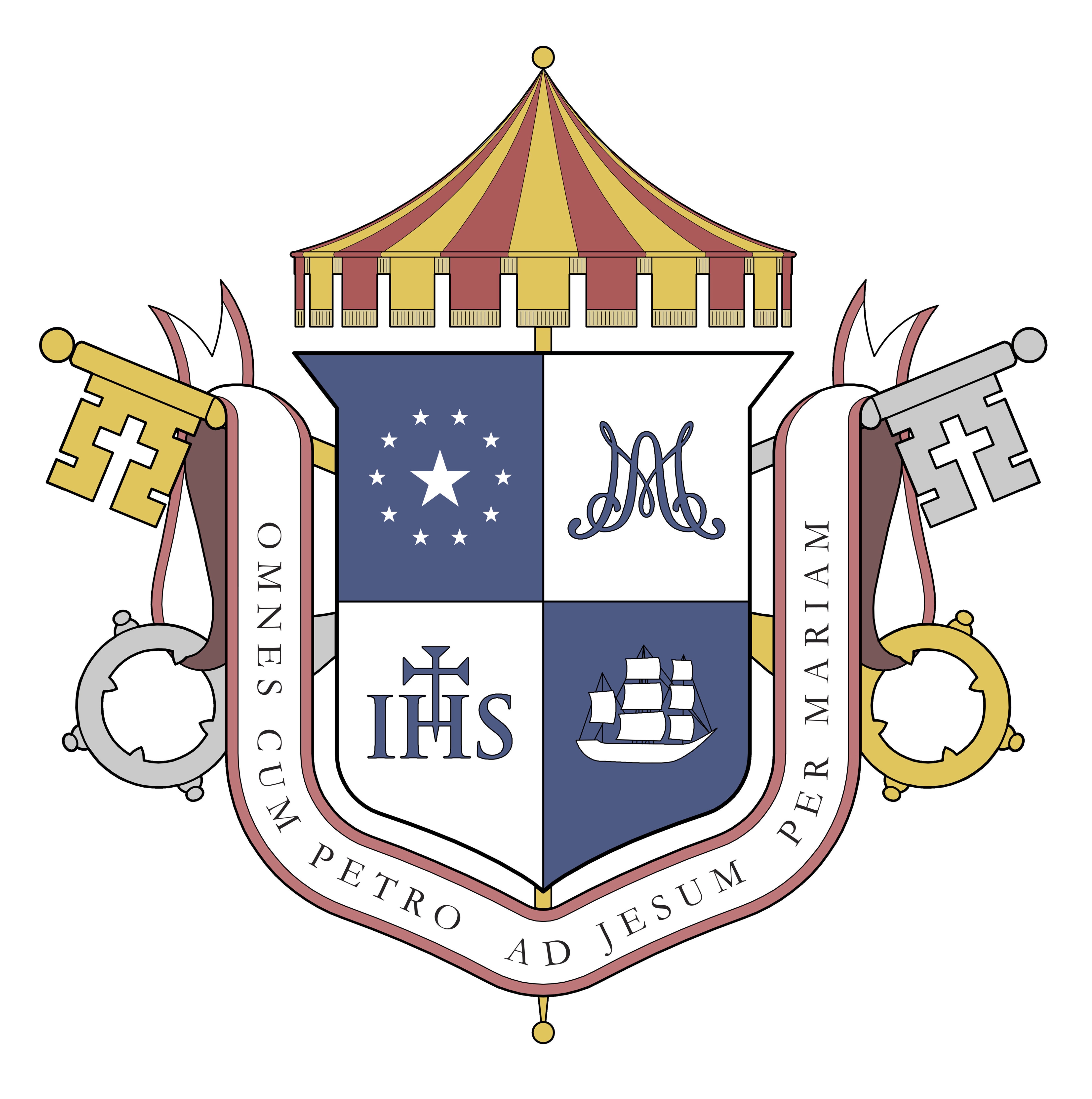 Ombrellino: Surmounting the shield, the Ombrellino is an umbrella of red and gold, which are the traditional Papal colors. It is commonly opened whenever a Pope visits a Basilica. It represents a unique relationship between the Basilica and the Holy Father in Rome.

Cross-Keys:  The keys refer to the promise of Christ to Peter, “I will give you the keys to the kingdom of heaven. Whatever you bind on earth shall be bound in heaven; and whatever you loose on earth shall be loosed in heaven.” (Matthew 16:19). The gold key on the left alludes to the Church’s power in the kingdom of heaven. The silver key on the right indicates the spiritual authority of the papacy on earth. The mechanisms are turned up towards the heavens and the grips turned down into the hands of the Pope. The presence of the keys symbolizes the continuous connection of the Basilica to the Holy See.

Design of the Shield:  The central element of the seal is a shield divided into four distinct sections, which are symbolic of key aspects of the parish’s history.  The colors of the shield are blue and white and symbolize the mantle of piety (blue) and purity (white) of the Mother of God.  Similar colors appear in the flag of the Commonwealth of Virginia and in the Seal of the Diocese of Arlington. Most Reverend Michael F. Burbidge was born June 16, 1957, in Philadelphia, PA, the second son of Francis and Shirley Burbidge and brother of Francis Burbidge, Jr. He attended Catholic grade schools and graduated from Cardinal O’Hara High School, Springfield, PA, in 1975. From high school he went to St. Charles Borromeo Seminary and was ordained a priest of the Archdiocese of Philadelphia by John Cardinal Krol in 1984.

Bishop Burbidge holds a B.A. in Philosophy and an M.A. in Theology from St. Charles Borromeo, an M.A. in Education Administration from Villanova University, and a doctorate in Education from Immaculata College.

Fr. Michael Burbidge’s first priestly assignment was as Parochial Vicar of St. Bernard Church in Philadelphia, where he served for two years. From 1986-1992 he was on the faculties, successively, of Cardinal O’Hara High School, Archbishop Wood High School and St. Charles Borromeo Seminary, where he also served as Dean of Students.

In 1992 Fr. Burbidge was named Administrative Secretary to Anthony Cardinal Bevilacqua, Archbishop of Philadelphia, and served in that capacity until 1999. In 1998 he was made Honorary Prelate to His Holiness Pope John Paul II, with the title of Monsignor. Fr. Edward Hathaway was born January 5, 1961, to Charles and Marie Hathaway in Oakland, CA. One of seven children, he attended Oak View Elementary School and James W. Robinson High School in Fairfax, VA. He graduated from the University of Virginia in Charlottesville in 1983 and studied at Cambridge University in England, 1983-84.

He worked as a technical recruiter for Essex Human Resources and Metier International, and as a mortgage bank recruiter with Hunter Search before entering St. Charles Borromeo Seminary in Wynnewood, PA.

Do you really want to delete card?

This process cannot be undone.

Card has been deleted successfully.